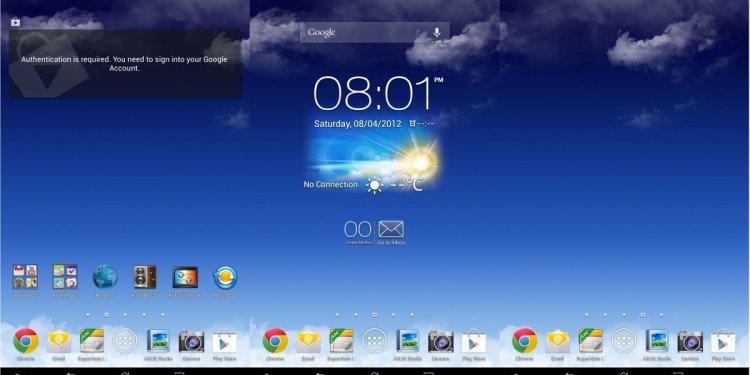 Most of Asus’s tablets don’t ooze ego – there’s generally little attempt to make their interfaces vary much from vanilla Android, which is how manufacturer's usually put their 'stamp' on a tablet. The Asus MeMO Pad HD 7 is no different.

It looks just like vanilla Android 4.2 (the version the tablet runs), apart from a few little tweaks. The most obvious gets its own spot on the main nav bar – where you’ll also find the usual back, Home and multi-tasking shortcuts.

The extra one opens-up a tray of widget apps that sit on top of your home screen, rather than ‘in’ it like most widgets. These include a stopwatch, video player, calculator and a half-dozen other little utilities. We didn’t find them desperately useful, and this toolbar is one of the few parts of the interface that’s sluggish to operate, but it’s an inoffensive addition.

It scored 12, 800 in the AnTuTu benchmark, which is roughly on-par with the first Nexus 7 (but around half the score of a 'high-end' quad-core chip like the Galaxy S4's), and it can handle fairly impressive games, if not without frame drops in some titles. And our usual gaming benchmark Real Racing 3 continually crashed before we got to the tarmac. For pure gaming, the first-gen Nexus 7 is superior.

As with most tablets, you’ll need a third-party app to get the most out of the Asus MeMO Pad HD 7 as a video player. Its video file support is much better than Android devices running an earlier version of the software – with integrated support for MKV – but it still failed on rare occasions to play either the audio or video track when certain codecs are used.

With MX Player, an app that fills-in support gaps using software rendering, the MeMO Pad HD 7 can play virtually any video file. The quad-core Mediatek CPU may not be a true powerhouse, but it can handle HD video at full speed.

We find the Asus MeMO Pad HD 7 a pretty great little video buddy. It’s portable, but has a large enough screen to make watching a movie an enjoyable experience. Having a microSD card slot to hand is also a massive bonus – letting you carry a pretty sizeable movie/TV collection around with you.

The biggest issue is the reflective screen, which does become an annoyance when the tablet is taken outside.

The Asus MeMO Pad HD 7’s internal speaker is, much like the Asus-made Nexus 7, isn’t too great either. Volume output and the power of the sound have been improved significantly – it’s no longer weedy-sounding – and uses a stereo driver rather than a smaller mono one.

However, in another respect it might as well be mono. Both speakers sit along a thin grille on the bottom of the tablet’s rear (when the tablet is held upright). This is a fairly poor setup for movie-watching, as it has no hope of creating anything approaching a stereo effect. Its highly positional output gives a definite impression of the sound coming from one edge of the tablet when it’s held on its side.

For upright casual games, though, this is a pretty good speaker for a budget tablet.

Asus has also appeared to have addressed another complaint made about the Nexus 7. Output from the headphone jack is no longer depressingly low. It’s not hugely loud either, but only truly hard-to-drive headphones should have problem with the Asus MeMO Pad HD 7’s output.